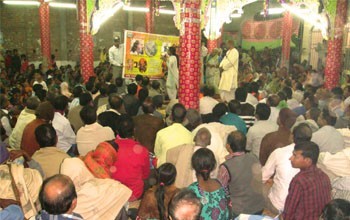 Adam’s Eminence and Glory Fades Away

Mr. Apan was on his deathbed. A spiritual minister from MFI, Mr. Masood, prayed for him. As a result, Mr. Apan was healed. After being healed Mr....

His Holiness Younus AlGohar is the Official Representative of Kalki Avatar Lord Ra Gohar Shahi, and Co-founder of Kalki Avatar Foundation. He is a recognised advocate of divine love and tolerance. He holds eleven Master’s degrees on various subjects.

As the Representative of Kalki Avatar, His Holiness has many miracles attributed to Him, including spiritually healing patients of incurable and fatal diseases.

His Holiness was born in the Indian Sub-continent, and grew up practising Sufism. From childhood, His Holiness was interested in spirituality; however, the thirst for the truth was not quenched until He met Lord Ra Gohar Shahi as a teenager.

On meeting Kalki Avatar Gohar Shahi for the first time, His Holiness stated,

When I first looked at the comely face of Gohar Shahi, I felt instantly that I knew Gohar Shahi all along, long before we had even come to this world.

I shall meet only Younus now, and Younus will meet the world on behalf of me.—Kalki Avatar Lord Ra Gohar Shahi

His Holiness travels worldwide on promotional tours for His organisations. He has been invited to speak in various worship-places and is well-received around the globe.

The Awaited One | GoharShahi.us | About.me